The sun is just peeking over the tree line beyond the fields as I make the left turn onto Chipman Street. The morning is foggy, but not so dense that I can’t crack the throttle and open it up a bit. In seven miles I’ll arrive at the office and start my work day. Until then I’ll do my best to make use of the road in front of me.

For the next mile, the road is a long, straight, rolling section of blacktop through the farmlands near my home. The rising sun illuminates the mist giving the world around me a golden hue. Flaxen colored stubble, remnants of the recently cut hay, spans acres around me on my right and the ever-growing stalks of corn on the other. This morning is damp and cool. In it I can feel the end of summer rapidly approaching.

Soon it will be time to winterize this machine and, for a few, long months, only dream about riding down the midwestern backroads where I live. I scan the roadside, remaining vigilant for deer that tend to dart from their hiding places frightened by the rumble of my Buell. A heartbeat later and a mile is already behind me. As I crest a small rise the first curve awaits.

Even after being back in the saddle for over a year, cornering still isn’t my strong suit; I tend to be a tad shy especially considering the dampness of the morning has given the asphalt a shine of wetness that gives me reason to pause. Before entering the curve, I drop down five miles per hour more than I normally would. Twenty-five years ago, riding my FZR1000, I would have taken the curve with reckless abandon, scraping pegs, and wearing holes through the knees of my jeans. At twenty-five I was all speed and lean. Like most young men, I considered myself to be invincible.

That is, until she entered my life. My experience with her left an impact on me that will last a lifetime. And, by ‘she’, I’m not talking about my dream girl but, rather, an eighty-eight-year-old woman behind the wheel of a long, white Cadillac. The encounter was brief but, I can assure you, quite memorable.

According to Charles Kingsley (noted 19th century priest), “… the sunshine follows the rain…”. He was right. During my short recovery I met another woman, a wonderful woman, and fell in love with her almost immediately. And, as with all young couples in love, things naturally progressed. A proposal was on the horizon. Now, instead of a new motorcycle for my stable funded by the proceeds of the accident settlement, a suitable engagement ring was acquired, one that normally would have been beyond the means of a simple mechanic. Six months after we first met, we were engaged; six months after that, we were married.

Exiting the curve I straighten up and wind it up again, racing forward to the next bend.

Soon after came the first child, a son, and, over the next fourteen years, six girls followed. My responsibilities were many, but my heart was full. Any dreams I had of returning to two wheels had retreated to the deepest recesses of my mind. But life was good, nonetheless.

The next curve in the road is deceiving. Approaching from this direction it starts wide but quickly tightens up; I think it was designed by Fibonacci himself. If you scribe the wider line, you’ll quickly find yourself in trouble, scrabbling though the gravel on the shoulder. An aggressive, inside path is equally as dangerous since it’s nearly impossible to see oncoming traffic until you’re halfway through and you risk encountering a farm truck or harvester head-on. The safest choice is to stay right in the middle and either slow down or gradually lean harder as you go to make it through.

“If we had been able to diagnose it earlier, there are a host of treatment options available to us. But at stage four…”, the doctor’s voice trailed off for a brief moment, “at stage four the best we can hope for is maintaining a quality of life.”

More than seven years later I’ve all but forgotten the doctor’s name but his words still ring in my ears. Inflammatory Breast Cancer is a ruthless disease. It’s aggressive, growing at three to four times the rate of other breast related cancers. The term ‘quality of life’ is such a farce. I watched her slowly waste away to mere skin and bones while the doctors extended her ‘life’ for as long as they were able. Despite having originally been given the prediction of a mere eighteen months, she endured for more than twice that. The end result, however, was the same. The extra time with which we were given gave us ample time to get our legal affairs in order and, in some ways, prepared us mentally and spiritually for the inevitable end. But it wasn’t enough.

It’s a short sprint to a small, uphill chicane. Since the curves are shallow, I can navigate this one at full speed. I love to motor through it, leaning hard left, and then flicking the bike over swinging wide through the second curve. It can be a little challenging at first but, once you get past the topsy-turvy feeling, it is completely manageable even for a novice rider like me.

It’s been a rough three and a half years since we said our last goodbyes. While I felt well prepared for the road that lay ahead following my wife’s death, I had not fully taken into account how our children might struggle with their grief. A suicide attempt, many nights spent in the emergency room, and countless hours of therapy later have been difficult on us, to say the least. And though it feels odd to say it, it’s allowed me to connect with my kids more than I ever did before. We struggled with communication at first but, over time, our conversation has flourished.

There is a short straight away before the next curve. This one is a little tighter, but the road is banked allowing me to push through with a bit more confidence. I can lean a bit more or, at least, pretend that I am as I muscle my way through it. It is the cherry on top of my short, seven-mile ride into work. I sweep through it with ease, rounding the bend, and crest the hill. I’m quickly approaching the city limits.

Two years ago a random conversation with a friend filled me with the urge to start looking at bikes once again. Many hours were spent re-educating myself on what was out there and what might be best suited for me. I eventually made my purchase and put nearly five thousand miles of riding in during that first season. I’ll likely double that number by the end of this year. My bike has become a vessel of relaxation, meditation, and therapy. The road I’ve been traveling is long and winding with something waiting around each curve, sometimes tragic, sometimes exhilarating. What I find along the way may not always be something I want, but it’s often something I need.

Just over the rise the speed limit drops significantly. I slow the bike to a smidge over twenty-five, enough to avoid piquing the interest of the cop that sometimes likes to wait for unsuspecting motorists in the parking lot of the Methodist church at the bottom of the hill. I look for him as I pass. He’s not there today. Sitting up in the saddle a bit, I untense my shoulders, practically idling for the last quarter of a mile to the office.

In a few moments I’ll roll into the parking lot and this ride will be over. But, when the day is done, the bike will be waiting for me, urging me to see what is around the next bend in the road.

Ed. note: I just realized that it’s been nearly a year since I posted my last ‘toon. I’ll try to get back in the groove and do them much more often. 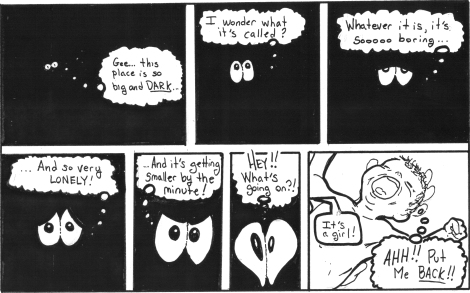 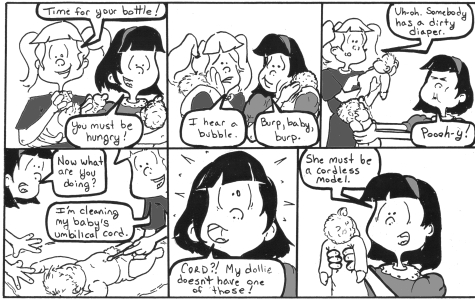